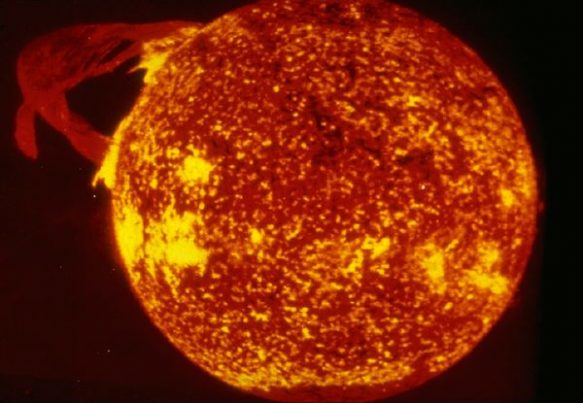 The Sun is the source of energy that sustains all life on Earth. Despite numerous studies about its properties and activities, much remains unknown about our nearest star.

The Sun’s outermost layer, called the corona, can reach temperatures of up to 3.5 million degrees Fahrenheit (two million degrees Celsius), more than 20 times hotter than its surface. Moreover, it blasts out winds of electrically charged particles traveling at hundreds of miles per second. All this activity requires massive amounts of energy, and the source of such energy has been a mystery, until a group of scientists from Queen’s University Belfast discovered how magnetic waves heat the Sun’s atmosphere and propel solar winds, in a study published in Nature Physics.

Scientists have long suggested that these waves may play a role in maintaining the sun’s extreme temperatures. Dr. David Jess from the School of Mathematics and Physics at Queen’s and one of the authors of the study, explained that many scientists have predicted magnetic waves – called Alfvén waves – to be the source of the energy that heats up the sun’s outer layer.

“For a long time scientists across the globe have predicted that Alfvén waves travel upwards from the solar surface to break in the higher layers, releasing enormous amounts of energy in the form of heat,” said Jess. “Over the last decade scientists have been able to prove that the waves exist but until now there was no direct evidence that they had the capability to convert their movement into heat.”

Now for the first time, Jess and a team of researchers presented evidence of this phenomenon by detecting the heat produced by Alfvén waves originating within the center of a sunspot the size of our own Earth. A sunspot of that magnitude is said to give off immense power and energy and can form shock waves that heat the surrounding plasma by thousands of degrees.

The team used advanced high-resolution observations from the Dunn Solar Telescope, as well as NASA’s Solar Dynamics Observatory satellite to image structures and motions on the sun with about 540-mile (870-kilometer) resolution every 12 seconds.

The scientists detected strong magnetic waves throughout the corona, with intense fields similar to modern medical MRI (magnetic resonance imaging) machines, and are even bigger than our own planet. Their calculations suggest that the Alfvén waves are capable of driving the solar wind and heating on the corona.

The research team further discovered that these waves may be far more profuse and up to more than 100 times stronger than ever detected, potentially producing about 10,000 times more energy overall to the corona.

They observed the Sun’s light as it breaks up into its constituent colors and examined the behavior of certain elements within the Sun’s atmosphere, such as calcium and iron. The team then detected intense flashes of light in the image sequences, which indicated that Alfvén waves convert their energy into shock waves, similar to an aircraft creating a sonic boom as it breaks the sound barrier. The shock waves then ripple through the surrounding plasma, producing extreme heat. (Related: Mysterious magnetized waves ripple across the Earth and the Sun, influencing Earth weather.)

“Using supercomputers, we were able to analyse the data and show for the first time in history that the Alfvén waves were capable of increasing plasma temperatures violently above their calm background,” said Dr. Samuel Grant, study co-author from Queen’s.

How exactly these magnetic waves transfer their energy to the matter in the corona to heat or accelerate it remains unclear, and the waves did not appear sufficient enough to be the source of intense emissions of radiation from more energetic regions of the corona.

Despite this, the scientists believe their study opens up a new opportunity to better understand how the phenomenon could potentially be applied in other areas such as energy reactors and medical devices.

Head over to Space.news for more articles about the Sun and other stars.