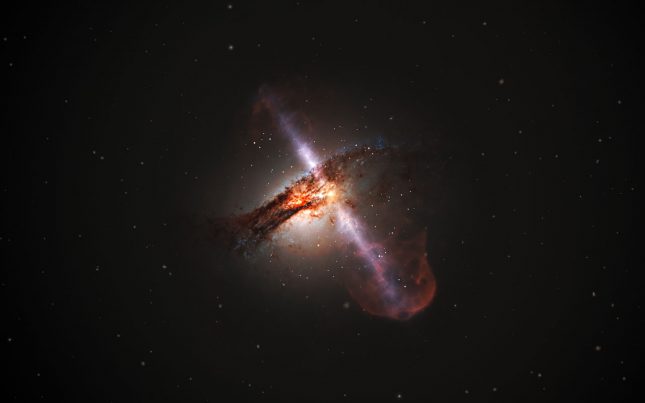 Astronomers have detected a supermassive black hole blazing its way through space at a speed of approximately five million miles an hour. At this speed, it could cover the distance between the moon and the Earth in only three minutes (as a reference, Apollo missions take around three days to reach the moon. The fastest recorded trip was a probe which took eight hours and 35 minutes). The supermassive black hole is located in a galaxy called 3C 186 which is eight billion light-years from Earth. These findings, which was published in the journal Astronomy & Astrophysics, explain that the phenomenon was said to be caused by two black holes colliding.

Supermassive black holes are incredibly fascinating. They are giant masses of energy packed into a very small area. Think of a star ten times larger than our sun squeezed inside a space only the size of New York City. The gravitational field is so strong that not even light can escape — thus the term, black hole. Einstein’s theory of general relativity predicted the presence of these space objects long before they were actually observed. When a massive star dies, it leaves behind a remnant core which is dense. The core then “sucks in” surrounding forces, producing a black hole. Supermassive black holes are giants, weighing as much as a billion of our suns.

Black holes are present in almost every galaxy, including the Milky Way. They control the formation of stars and have the potential to manipulate the very fabric of space-time itself.

This new observation raised more questions than answers. Marco Chiaberge and his colleagues who spotted the black hole were first alerted when they looked at an image taken by NASA’s Hubble Space Telescope. Near the fuzzy splotch which was galaxy 3C 186 was an incredibly bright spot known as a quasar. By itself, this isn’t very peculiar. Quasars are known as the nucleus of a galaxy. They are bright because of the disk of gas that surrounds them at their center. However, in this particular case, the quasar was located 35,000 light-years from the center of its galaxy.

To verify if what he saw was correct, Chiaberge, who works at the Space Telescope Science Institute (STScI) and Johns Hopkins University, asked fellow astronomers for their observations using other instruments, including the Sloan Digital Sky Survey’s telescope in New Mexico and the Chandra space observatory. These results confirmed the Hubble findings. Images presented suggest that galaxy 3C 186 had recently merged with another galaxy causing the black holes at their centers to collide.

So what happens when two supermassive black holes collide? Well, imagine two spinning tops coming together. At one point, one black hole is given enough energy to kick off into another galaxy, never to return. This leaves distinctive trail marks — gravitational waves that bear faint arcs — that can be seen with an X-ray. This lasts for thousands of years. The afterglow is bright enough for Earth scientists to see them.

Supermassive black hole collisions are extremely rare due to several factors. Co-author of the new paper, Colin Norman of STScI and Johns Hopkins University, says that “the asymmetry depends on properties such as the mass and the relative orientation of the back holes’ [sic] rotation axes before the merger. That’s why these objects are so rare.”

It is estimated that the energy required to recoil a black hole like the one in galaxy 3C 186 is equivalent to around 100 million supernovas. That’s impressive, considering that a single supernova carries that total energy of around 10 billion suns. The fleeing black hole will escape its galaxy in about 20 million years, destined to roam alone through the universe forever.

New research estimates that as many as 100 of these collisions are happening within five billion light-years from Earth.