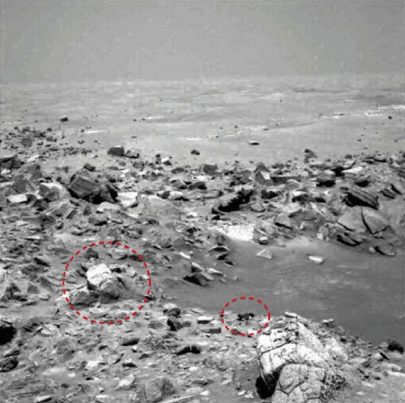 In an image captured by NASA’s Opportunity rover, UFO enthusiasts claim to have sighted the “face of God” carved out on a Martian rock at the Concepcion Crater. Mars’ Concepcion Crater has long intrigued NASA scientists because of strange coatings found on rocks near the area.

NASA’s Mars Opportunity rover sent an image of a rock back to the space agency Monday, which UFO hunters claim resembles an ancient Mesopotamian deity called Nabu, the god of wisdom.[1]

The UFO hunters speculate the stone sculpture was left on Mars by an alien race, which were worshipped by the ancient Assyrians as gods. According to Assyrian legend, gods flew among the stars with chariots.

People have used these legends to suggest an advanced alien civilization visited the ancient Assyrians and Babylonians. These aliens may have visited Mars, leaving sculptures of themselves and an Assyrian representation on the red planet.

“Found these faces on Mars side by side. One is looking towards us and the other is looking to the left. The face looking at us has a lot of similarities to the ancient Mesopotamia faces,” reports Scott Waring on UFO Sightings Daily.[1]

“They were made. They existed once long ago in our solar system; right next to our planet. They were born, they lived and they died. They don’t need you to believe or not. They are gone,” he continued.

Although the photo has the UFO community teeming with excitement, NASA expressed no interest in further exploring the so-called “face.”

“As you can probably tell, it is a natural rock at the disrupted rim of a small crater, not a sculpture made by some ancient culture,” NASA spokesman Guy Webster told Fox News in an e-mail. “’But it’s great that people are using their imaginations and enjoying the full public access to every image taken by any Mars rover.”[1]

The photo most certainly has expanded the imagination of UFO community. One alien enthusiast even went so far to say he could see the face of Donald Trump in the photograph.

“You have highlighted. Two faces I can see three the other is to the right with a big nose maybe these were in some sort of association.”

“While you are at it, why has the complete body below the ‘squirrel’ not been mentioned? Face, arms, torso and legs lie just under and a little bit right of the squirrel.”

“What about the bottom left corner in the big picture… looks like a huge face half covered in the dirt.”[1]

Seeing what you want to see

Skeptics have dismissed the UFO community’s claims as a product of pareidolia, a psychological phenomena where the mind projects patterns onto objects which don’t reflect reality. Common examples of perceived images include objects in cloud formation, the man in the moon and the horse head in the Orion nebula.[1]

As should come as no surprise to anyone, the UFO community rejects the claim that the Nabu statue is an illusion projected onto the rock by the human mind. According to Waring, the evidence that the image is indeed an artifact left over by an ancient civilization is overwhelming.

“This photo alone should be enough to convince the United Nations that intelligent life once existed on Mars,” Warren writes.

“NASA doesn’t want anyone to know the truth, because they will be asked to share the info and technology that they have found.”[2]

This isn’t the first time the UFO community claims to have found evidence that Mars once harbored intelligent life. Just last month, UFO hunters say they found a gigantic statue of the Buddha in the Martian mountains, suggesting the red planet was once home to an ancient civilization with a religion.[2]

To read more about Donald Trump News, please go to Trump.news for all the latest updates