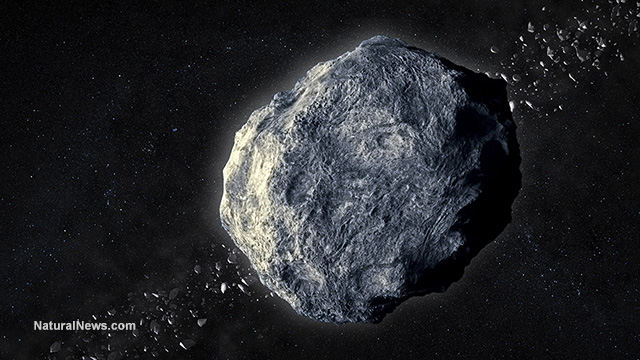 A mysterious blizzard of space debris, nicknamed WTF, is currently on a one-way collision course with Earth. The UFO is expected to enter the atmosphere above the Indian Ocean on November 13.

The bulk of the object is expected to be engulfed by flames as it penetrates the atmosphere, though pieces of debris may shower the Indian Ocean. Officials state that the object should not pose a threat to people. Although experts have calculated when and where WTF will crash, they still don’t know what WTF is.

“The object is quite small, at most a couple of meters in diameter, and a significant fraction if not all of it can be expected to completely burn up in the atmosphere,” the European Space Agency’s (ESA) Space Situational Awareness program said in a statement posted online.

The object was discovered October 3, 2015. The object’s orbit is well understood since it has already been observed twice in 2013 by the same survey team, according to the agency. It will land approximately 40 miles off the coast of Sri Lanka, at about 6:20 UTC on November 13.

Astronomers were originally bamboozled by the object when they first detected it this month. They were able to calculate the object’s trajectory by referencing records of previous observations taken of the UFO in 2012 and 2013.

Doomsday is not upon us, for those who might be worried. The object is most likely man-made. By tracking a piece of the debris, scientists concluded that it was most likely an artificial piece of material rather than a piece of space rock.

According to Bill Gray, an astronomy software development expert, the object appears to have a low density, hollow shell and a highly elliptical orbit that extends beyond the moon. The farthest point of its elliptical path is about twice the distance between the Earth and moon.

Based upon its size and features, scientists speculate that WTF may be a piece of a recent lunar mission or previous space missions.

“Whatever is left will fall into the ocean about 100 km off the southern coast of Sri Lanka. Its mass is not sufficient to cause any threat to the area, but the show will still be spectacular, since for a few seconds the object will become quite bright in the noon sky,” ESA wrote.

Space debris has long been an issue for countries and companies with assets in satellites. There is a flurry of junk just floating aimlessly around space. NASA and other space agencies keep track of the debris in order to ensure they don’t strike and damage active satellites. Even a small piece of debris whirling through space could disrupt weather monitoring and spacecraft used for communication.

The collision gives scientists an opportunity to test run contingency plans put in place in the event of an unexpected asteroid impact. The object shouldn’t harm anyone on the ground, though it will light up the sky around noon.

“This is like a controlled experiment. We generally can’t predict when asteroids or other meteor parent bodies are going to hit Earth, and so we can’t plan observations of these events,” Lowell Observatory planetary astronomer Nick Moskovitz said in a statement.

“This event, though, we can prepare for. Observing it will allow us to gain a better understanding of how Earth’s atmosphere is processing material as it comes through,” Moskovitz added.

“This will help us gain some insight into what is actually making it to the ground and how that represents the asteroids out there.”